When Kids Get Bunions 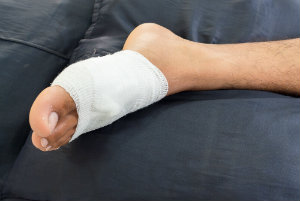 Quick: imagine someone with bunions.

Now let us guess: if you happen to have bunions of your own, you probably pictured yourself. If not, you probably thought of a middle-aged or older woman. There’s nothing necessarily wrong with that picture, of course—as a matter of fact, about 90 percent of bunion sufferers are female, and the likelihood of developing the problem does increase with age.

But that’s not the full story. We imagine you probably didn’t think of a teenager or even a smaller child, but the truth is that bunions can affect them, too—and more often than you’d think. Bunions (or, more accurately, the kinds of foot structures that are especially susceptible to bunion formation) can run in families, and occasionally they start very young.

Bunions in kids (also known as juvenile bunions) have to be approached somewhat differently than those in adults. First, because bunions are a progressive condition—or, in other words, they don’t get better on their own and they’ll generally keep getting worse over time if you don’t get treatment for them—a bunion that emerges in a child is considered more serious for the simple reason that kids have a whole lifetime ahead of them for the bump to get worse. While early detection and intervention is important no matter how old you are, it’s particularly critical for children.

Second, while surgery is a common recommendation for adults with bunions, it is rarely an ideal option for children. That’s because bones are still growing and hardening until they reach full maturity at around age 17, and surgical correction can damage or interfere with the growth plates in the bones. That’s another reason why it’s critical to catch the problem early and begin conservative treatment strategies right away—we want to eliminate painful symptoms and slow the progression, keeping the bump as small as possible for as long as possible so surgery can be avoided (or at least kept to minor procedures only) until adulthood.

Conservative measures may include stretching and exercise, orthotics, splints worn at night to place the toe in proper alignment, or other techniques. It’s also important that your child has good pairs of shoes that allow the front of their feet plenty of space to grow and wiggle without painful friction or pressure.

If you notice that distinctive bump forming on your little one’s foot, take them in to see Dr. Harvey Danciger for evaluation and treatment options. You can request an appointment online, or give our Palm Desert, CA office a call at 760-568-0108 today.